New here and wondering what’s going on? Busy Mom VS Daily Grind is all about making the dedication to do something every day that will help you live a happier, more fulfilling life. I have committed to document my journey of developing the habits of living moment by moment, being grateful, and bringing self expression + creativity into every day. Read more about the challenge HERE.

After picking up my 4yr old from pre-school, I got a call from a girlfriend who wanted to meet us at the beach.

She had rented a stand up paddle board.

Being the middle of the week, in the middle of the day I figured the beaches would be empty. BOY was I wrong!!! It was 90 degrees so I guess everyone and their brother decided to skip work to go to the beach. Luckily I had a resident pass to get parking, but my poor friend had to circle around the block about five times before finding a spot.

Herding two kids while carrying an infant and a heavy bag was nearly impossible through the sea of people. Nevermind the big ass heavy board my friend had to carry. It was her first time using a paddle board, and I guess had no idea how heavy it would be to try and carry out to the water!

When we finally found our way down to the water, I decided there was no way I was going to be able to keep track of a baby and two kids in this mass of people, and there was no way we could use a paddle board in the water with all those swimmers… so we decided to be sneaky and hop over the fence to the private side. No one took notice, so we settled in, umbrella and all.

The baby splashed in a big bucket of water, while Josephine seemed to just run around in circles. My oldest Penelope, hung back curious about the board. Time was ticking and it was becoming apparent that my friend needed a nudge to get out into the water, so we started cheering her on. It took a few minutes of pushing, but she finally made her way out there with the board.

She gave it a few wobbly attempts to stand on the board, then eventually came dragging it back onto the beach.

I have no idea how it ever happened, but somehow she convinced me to give it a shot next. You see, usually I don’t even put a toe in the water when we go to the beach. Who knows why. That’s just how I flow. But there I was, dragging this big ‘ol board out to the water, and I just walked right in up to my chest without a seconds thought to the water.

I hopped onto the board no problem, knelt, and paddled a out a little further. Small waves were rolling by, rocking the board. I felt a little wobbly, but eerily comfortable. I put one foot on, then the other, and slowly crept up to a stand.

Holy Cow! It was the coolest thing ever. I paddled out, my feet trying to balance against the waves. I turned to see my family but couldn’t find them. Somehow I had traveled a ways down the beach, so I tried to turn around. But no matter how hard I paddled, the strength of the water was stronger than me. Instead of turning around and paddling back, the current brought me right back in to the beach.

It was a short, but amazing trip.

My oldest ran down to meet me on the beach, and after struggling for some time to get it back up to where I had started, I convinced her to bring it out into the water instead and give it a try to paddle it up. (This thing was heavy. I mean HEAVY. We couldn’t even walk it up the beach, or drag it in the shallow water.  I have no idea how my friend carried it all the way from the bus to the beach!)

So, she agreed to give it a try. And there she went. Just as easily as I. And it was then that I remembered my camera and wished that I had it on me. I was so proud to see her up there on that board, paddling away. My little bean. All grown up. Trying new things. Walking on water.

It was a cherished moment. And I have no idea why I just told you all of that. I guess I just felt like reliving it. Bravo for you if you’re still reading along! lol ;0)

Anywho, we had another adventure to go on, so shortly after we packed up to go. It was my brother-in-law’s birthday, so we took an hour trip to join the party. Upon coming home, I had the urge to sketch a cupcake. Mmmmm 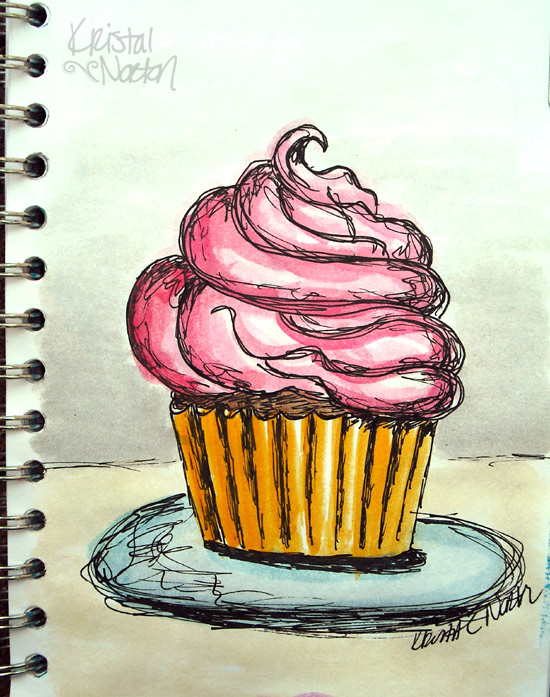 Subscribe to my Museletter for inspiration and practical tips to keeping on track with this scary journey of reclaiming yourself and your creativity. You’ll also get VIP access to my new goodies, freebies, special offers, and more!

Success! Now check your email to confirm your subscription.

Kristal is a creative life coach who helps women reclaim their creative magic, reconnect with their Soul's wisdom, and realize their innate brilliance so they can lead a more authentic, fulfilling life. Click here to read more...